Koreans have long possessed a special method for blocking out the sweltering summer heat: bamboo blinds, or bal in Korean. Bamboo screens filter out strong sunrays but allow in the breeze. They can divide a space without hindering communication. They have long been an important element in Koreans’ everyday lives, and in rituals as well. The traditional bamboo-screen maker Jo Dae-yong and the architects Jang Young-chul and Chun Sook-hee, who have creatively applied the craft of bamboo-screen making to architectural structures, share their thoughts on this traditional Korean handicraft. 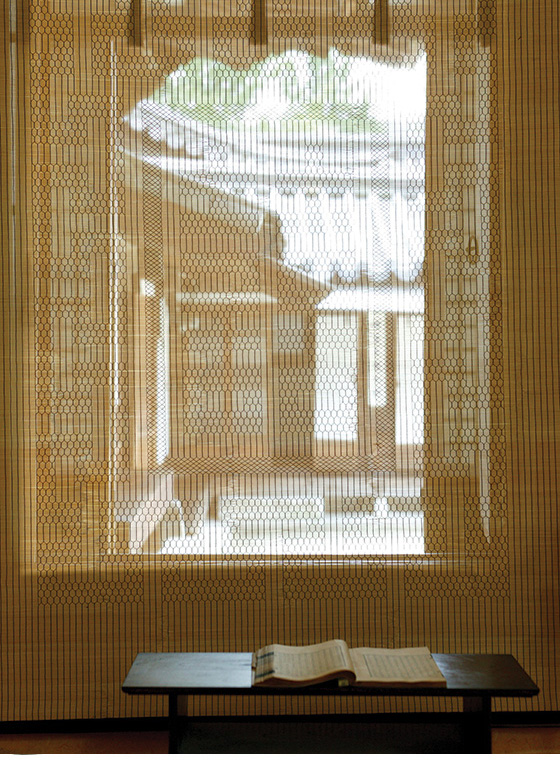 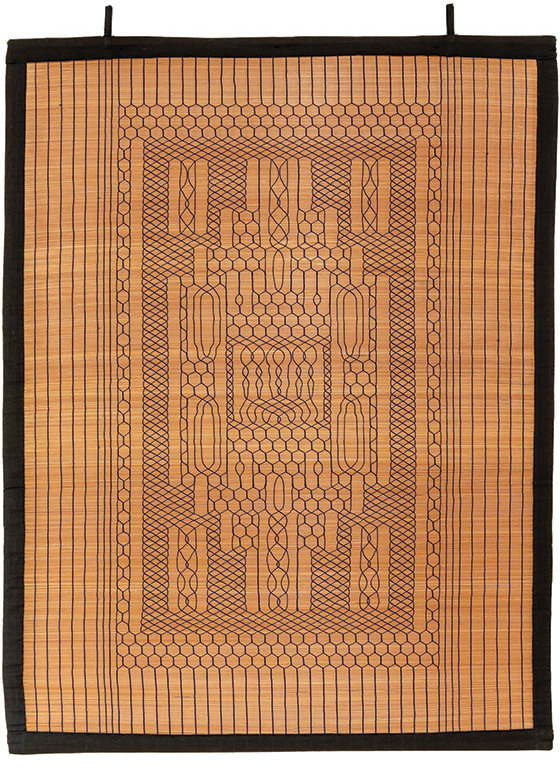 A Connective Barrier for Sunrays

“A bamboo screen minimizes the impact of a strong sunlight, but still permits air movement. It provides privacy indoors, but allows a glimpse of the outside. It partitions space, but without creating a stuffy sense of isolation. If you have a bamboo screen, you can open your door wide on a summer day and enjoy the breeze without worrying about gazes from the outside.”

A bamboo screen was affixed in front of the throne or in the living quarters of the queen as a device to prevent any inadvertent viewing of the royal face of the king or queen. The queen mother remained behind a bamboo screen when she ruled as regent on behalf of a young son. This kind of political practice was referred to as suryeom cheongjeong, or “ruling behind the bamboo screen.”

The major material for Korean bamboo screens is, in fact, bamboo. Jo Dae-yong, the nationally designated master of bamboo-screen making, uses Simon bamboo that grows in the coastal area of Tongyeong in the southern section of the country.

“Simon bamboo is a relatively thin-stemmed bamboo that is commonly used for making arrows and tobacco pipes. Bamboo culms with thick stems leave obvious marks from their joints in a bamboo screen. Simon bamboo is free from such noticeable joints, and therefore is more suitable as a material for blinds. This species of bamboo is also soft and flexible but maintains great durability.”

Master Jo must collect a year’s supply of bamboo in December and January. Summer is a poor season to gather bamboo since it is exposed to attack from insects. The collected bamboo stems are stripped of their outer skins with a knife and divided lengthwise into six or eight pieces. They are dried under the sun for 45 days, at which point the sun-bleached bamboo pieces are split again into 1-millimeter strips. These are then run through even smaller holes made in an iron plate.

Once bamboo strips of the appropriate size are ready, spools of thread are hung on a weaving frame. A complex motif requires additional spools. Now, the weaving can begin. Threads are passed above and under the bamboo strips functioning as the warp to create the intended design. However nimble the maker may be, no less than 100 days are required to finish a single bamboo blind.

“Korean bamboo blinds are flamboyant, but possess a gentle aesthetic. They are not boastful, but gradually exude beauty. It is like you do not realize there is a woven motif in the bamboo screen at first, but one year later the design suddenly captures your attention. Depending on the perspective from which you look at it or where you hang it, the bamboo screen can give different sensations.”

The decorative pattern Master Jo prefers is a tortoise-shell design. This hexagonal design symbolizing longevity is beautiful to the eye and also contributes to tightly binding the component bamboo strips. His bamboo blinds are both graceful and powerful. 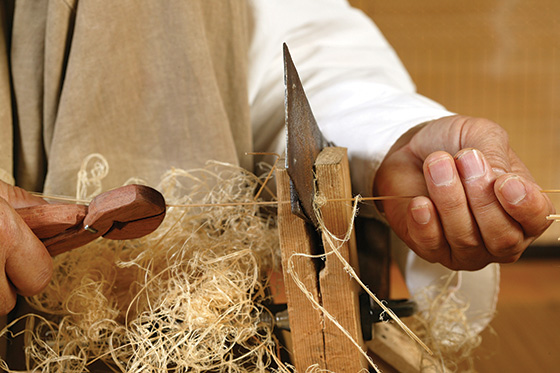 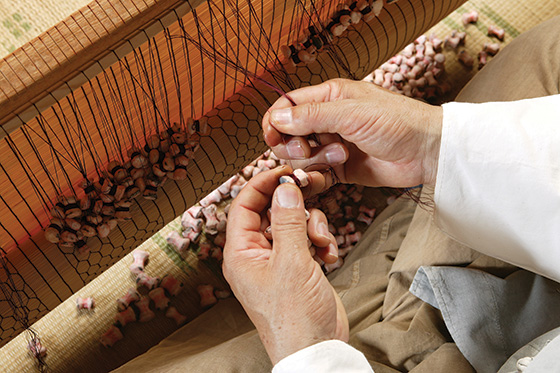 Bamboo strips are run through the holes in an iron plate; spools of thread are prepared, the number of which varies with the size of the bamboo screen and the complexity of an intended design (photo courtesy of the National Intangible Heritage Center). 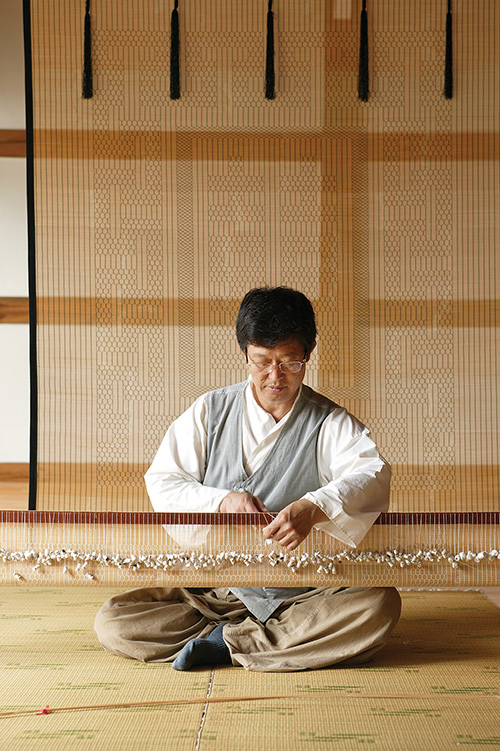 Bamboo-blind weaving is Jo’s family vocation. His great grandfather supplied bamboo blinds to the Joseon court. His bamboo screens were highly lauded by King Cheoljong (r. 1849–63). Jo’s grandfather and father also worked in this tradition. Jo Dae-yong first experienced bamboo craft as an elementary school student. After completing his military duty in his early 20s, Jo dedicated himself to bamboo-screen making. He gradually built a name for himself, and in 1992 was designated the national master of bamboo-blind weaving, National Intangible Cultural Heritage No. 114.

“When I received a request to restore the bamboo blind that once hung in the T-shaped shrine of Yeongneung Tomb, I went to the royal tomb and examined the shrine. There were devices installed along the upper edge of the doorframe that were used to hold a bamboo screen. Considering that blinds crafted for this purpose weighed as much as 15 kilograms, these kinds of supporting devices must have been necessary. I checked another royal tomb, Seolleung, and the shrine there also had these devices. The same was true for the royal ancestral shrine of Jongmyo.”

The bamboo blind for Yeongneung, the tomb of King Sejong, the fourth ruler of Joseon, was reborn in his hands. Master Jo also performed repair work on the bamboo screens at Jongmyo, where the spirit tablets of the Joseon monarchs are enshrined in individual spaces. There are about 100 bamboo screens in Jongmyo. The most recent project Master Jo was charged with was the restoration of the red bamboo screens in Hamnyeongjeon Hall at Deoksugung Palace, where Emperor Gojong spent the last days of his life prior to his death on January 21, 1919. Equipped with the three restored blinds 292 centimeters wide and 320 centimeters high, the royal building seems to have reclaimed the authority and dignity it possessed during the reign of Emperor Gojong.

“There were more than 20 bamboo-screen makers for the Joseon court: this indicates the importance of the craft at the time. I think we need to make more substantive efforts at the restoration of the tradition. There are 42 royal tombs on the Korean Peninsula. It is my dream to restore all of the bamboo blinds in these royal tombs.”

Restoring the past does not just mean the reinstitution of its material components. It also includes the effort needed to keep its intangible aspects alive. Jo Dae-yong and other masters of traditional skills dedicate their lives to preserving and revitalizing intangible elements of the past. Equally important to maintaining traditional skills is the creative work of reinterpreting them in contemporary sociocultural contexts. The architects Jang Young-chul and Chun Sook-hee at Wise Architecture embodied traditional Korean bamboo screens into the façade of a building. 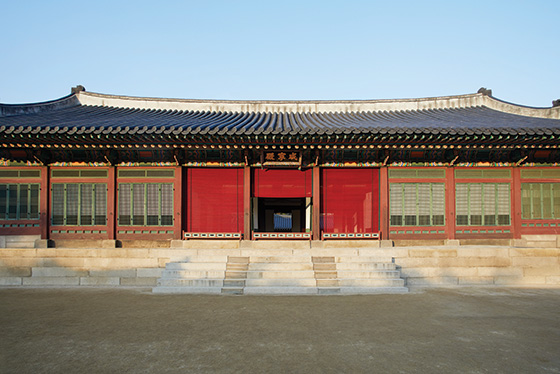 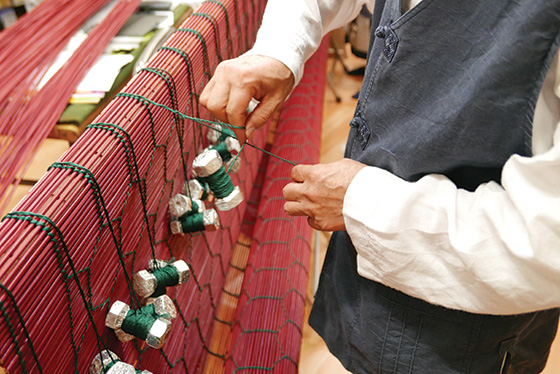 A Link between Architecture and Craft 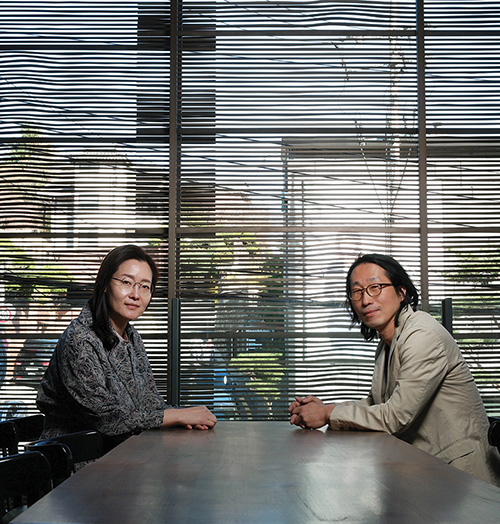 From the left, Chun Sook-hee and Jang Young-chul at Wise Architecture
(photo courtesy of Jung Meen-young)

Bukchon is a hilly neighborhood of traditional houses located between Gyeongbokgung and Changdeokgung royal palaces. Midway up Gahoe-ro street in Bukchon is a notable building with a striking appearance. It houses Dialogue in the Dark, an exhibition that offers the chance to experience everyday environments in the dark without recourse to sight.

“Dialogue in the Dark is an experiential exhibition that was initiated by Dr. Andreas Heinecke of Germany and has been shared by more than 10 million people in 32 countries. This is the first dedicated exhibition building for it in the world. When we designed this structure, we delved into the question of what could connect such keywords as ‘darkness,’ ‘Bukchon,’ and ‘tradition.’ We found the answer in traditional Korean bamboo blinds.”

The bamboo blinds are integral to the building. Its façade is composed of 27 elements evocative of bamboo screens. The façade made of bamboo blinds foregrounds the traditional characteristics of the Bukchon area and also delivers the essential theme of the exhibition—an experience without light. This bamboo-blind façade also amplifies the auditory effects of rain and wind.

“Bamboo blinds shield the light and obscure the image of that which exists beyond them. In this building, the bamboo screens on the façade symbolize the experience of everyday life in darkness, the main message of the exhibition.”

The bamboo screen elements comprising the face of the building are not made of bamboo, however. The designers chose to translate this tradition for modern uses. Aluminum sheets were cut with a water jet to create component strips possessing a rough texture matching that of actual bamboo strips, and these aluminum strips were connected with acetal beads one by one, just like bamboo strips are interwoven with threads.

“Bamboo is such an attractive material for architecture. Without much work, you can produce lengthy architectural members. They grow fast, so there is little worry about supply. However, bamboo stems are rich in moisture and therefore vulnerable to the growth of mold. The Dialogue in the Dark building borrows from traditional bamboo blinds only their texture and function. A bamboo screen physically divides an area and creates a boundary to vision, but it still connects the space throughout. Through the metaphor of a bamboo screen, we wanted to say that we are within a single space and can still communicate with each other.” 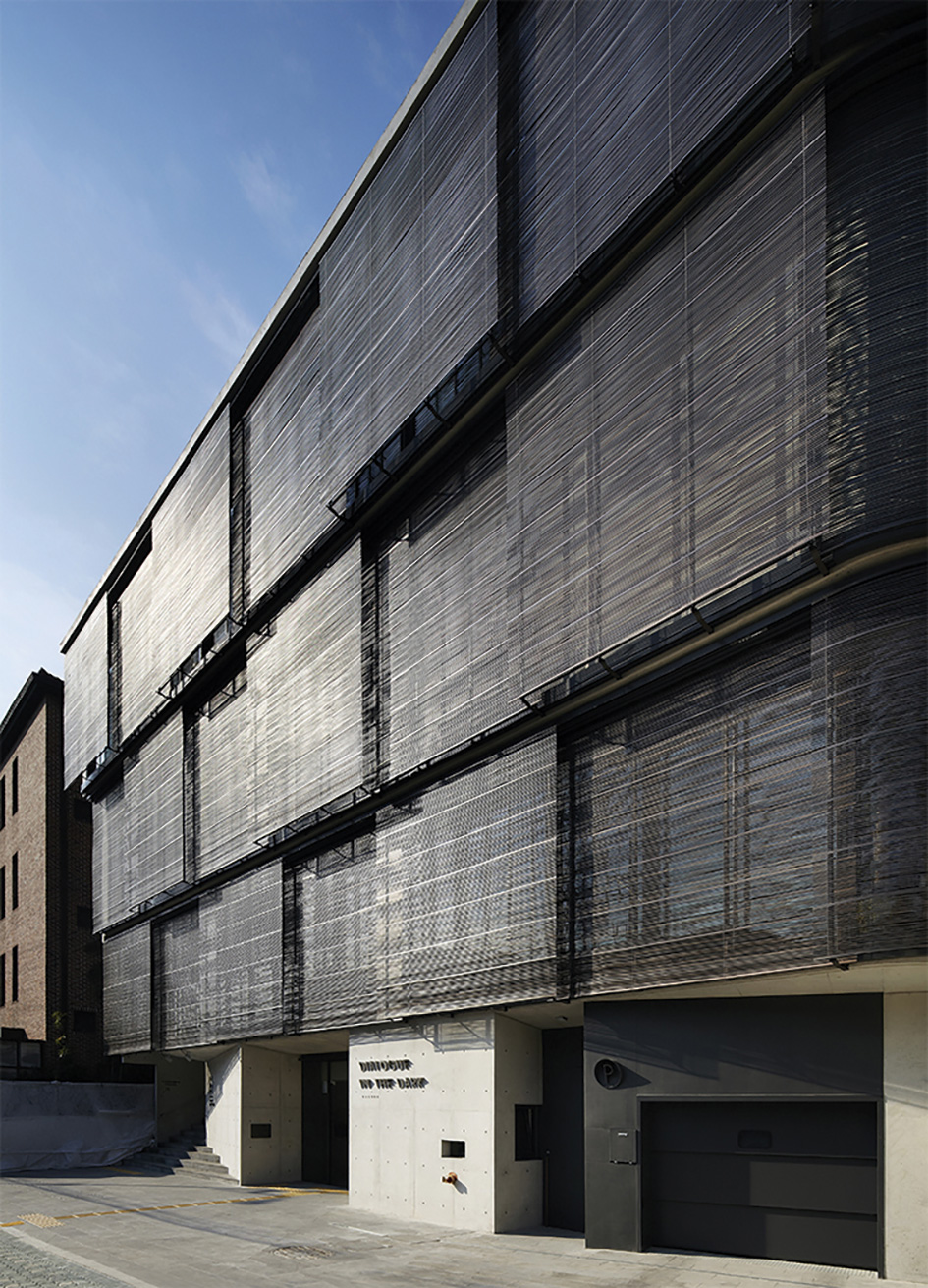 The façade of the Dialogue in the Dark building in Bukchon, Seoul (photo courtesy of Kim Yong-kwan)

A Modern Translation of Tradition

Whenever a new building is constructed in the Bukchon area, it is required to reflect traditional Korean sensibilities in its design so that it can harmonize with the surrounding architectural environment. This explains the dominance of houses with traditional tiled roofs in this area. Faced with these regulations, the architects Jang and Chun did not see an easy way out. Given its target visitors and the fact that the planned building was an exhibition space, the image of a traditional Korean house did not match up in their minds. During their artistic investigation into how to dress a building with a modern purpose in a traditional way, they extended their exploration from architecture to craft and finally found a satisfying solution in traditional bamboo blinds.

“When we work on new buildings in the areas around the royal palaces, I am always asked about whether they will blend well with the traditional architecture of the palaces. The royal compounds were built using the state-of-the-art skills and techniques of the time. Rather than clinging to roof tiles or wooden pillars and beams, we’d be better off recognizing that what we are doing today is part of history and tradition.”

When the relationship between tradition and architecture is freely explored rather than obsessively concentrating on traditional architecture per se, tradition allows various interpretations and enables a transition to modern creations. Jang Young-chul and Chun Sook-hee believe that complementing and reimagining what has been transmitted is part of what is required of architects.

“An increasing number of early-modern buildings have been registered on government heritage lists. This means that the buildings that are part of our everyday lives or have been closely associated with our memories can become something to preserve and protect as heritage. Yes, architecture is part of our memories. We, as architects, need to think hard about how to utilize or preserve these architectural manifestations of our memory.”

The same is true of the transmission of tradition. Tradition is not fixed in a particular point in time, but a process under which what has been passed down to the present is continuously created and recreated for the future. This must be kept in mind by contemporary Koreans as they pass along traditions. 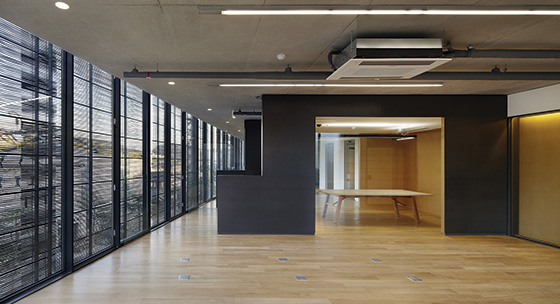 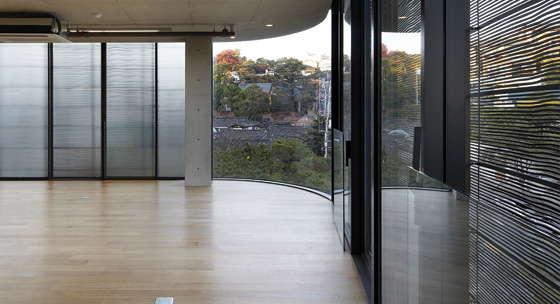