XUZHOU, China, Nov. 23, 2021 /PRNewswire/ -- XCMG (SHE:000425), the leading construction machinery manufacturer, has reported an annual sales revenue of USD5.66 billion in 2020, taking the first place in the long established ICM20 ranking of the world's largest crane manufacturers released by the British KHL Group on November 12. 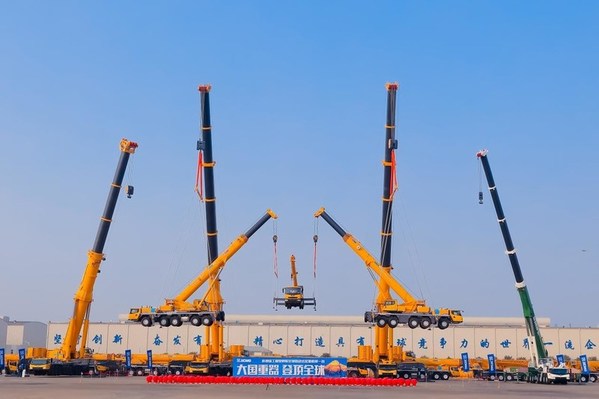 The 74 percent year-on-year robust growth has moved XCMG up from last year's fourth place to the top spot. And in the first 10 months of 2021, XCMG has reported a sales revenue of 235% increase for customized hoisting machines.

"XCMG has always put technological innovation a top priority, we now have five major R&D centers worldwide, a first-ranking national level technology center and the industry's only national key laboratory of high-end engineering machinery intelligent manufacturing and national industrial design center. Today, with the unremitting efforts of more than 4,000 XCMG scientists and engineers, we are leading the industry's technological innovation development and step by step, catching up and even surpassing with our competitors," remarked Wang Min, president and chairman of XCMG.

To build a better community with a shared future for the world, XCMG Hoisting Machinery published the "XCMG Hoisting Machinery Carbon Peak and Carbon Neutrality Declaration". The declaration solemnly promises to "actively pursue the green development vision and shoulder the responsibility of building an ecological civilization, taking the lead in the industry to complete the goals of reaching carbon peak and achieving carbon neutrality, and leading the high-quality, green, low-carbon and sustainable development of the industry".

To achieve that promise, XCMG has set out six goals in the declaration including vigorously promote clean and low-carbon energy structure, thrive to build a pioneering green and intelligent manufacturing enterprise, accelerate the application of low-carbon, energy-saving technologies and layout of new energy products, support China's clean energy construction, promote the application of remanufactured products and foster a sense of carbon reduction.

According to Su Zimeng, chairman of China Construction Machinery Association (CCMA), there are nearly 50,000 private hoisting companies in China, among which the assets of the top 50 amount to close to USD1.57 billion. These firms have not only built a beautiful China, but have also been among the most active forces in global engineering constructions.

"China has massive potential for economic development with large-scale infrastructure constructions, and its 'dual carbon' goal shows a sense of responsibility of a major country. China's industries are showing two development trends of going green, low-carbon and industrial upgrading, which have also provided us with space for further development," said Su.