An alcoholic drink's ceramic container resembles a Hanbok dress and contains liquor that is like a sweet dew and emits a bright red color.

This drink is also in mentioned in the folktale "Byeoljubujeon" (The Hare's Liver). The turtle mentions the liquor to lure the rabbit to go to the palace, as the Dragon King of the Sea needs to eat the rabbit's liver to cure his disease

In the famous love story "Chunhyangjeon" (The Tale of Chunhyang), the heroine brings out the drink for her lover Mongryong when asking him to stay instead of leaving for Hanyang, the capital of the Joseon Dynasty.

Hwang Jini, a well-known entertainer of the 16th century, compared the spirit of Seo Hwa-dam, the man she was enamored with, to the liquor as well.

Gamhongno has been known throughout the ages in Korea, having appeared in novels and literary works from the Joseon era (1392-1910) and proverbs. It is mentioned in the stories of pansori (traditional lyrical opera) "Byeoljubujeon" and "Chunhyangjeon."

In the books "Gyeongdo Japji" (Magazine of the Capital) by scholar Yu Deuk-gong (1748-1807) and "Joseon Sangsik Mundap" (Questions and Answers on Joseon Common Knowledge) by scholar Choi Nam-seon (1890-1957), gamhongno is named one of the three main alcoholic drinks of the Joseon Dynasty.

The saying "Gamhongno exists even in a pottery made of dirt" means something that looks unappealing on the outside could be good and beautiful on the inside.

Today the drink is made in a brewery in Paju, Gyeonggi-do Province. Master brewer Lee Ki Sook works to preserve the drink and its heritage, things that were nearly lost over the years. In addition to the smell of the ripening alcohol, the scent of medicine was interspersed throughout the brewery. 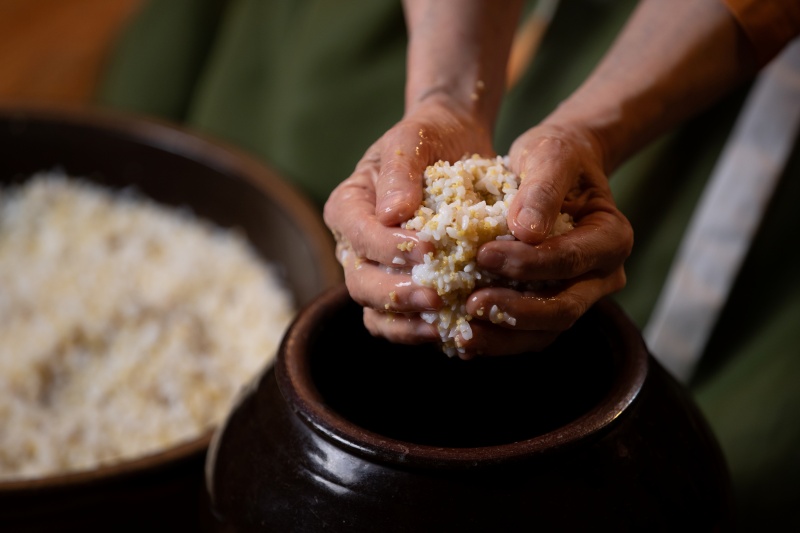 Gamhongno is made by mixing rice and non-glutinous millet in a 7:3 ratio and steaming it. After that, nuruk (yeast) and water are added and after 15 days of fermentation, the primary mash mitsool is produced. After distilling it twice to enrich the taste and fragrance, the seven types of medicinal ingredients -- longan arillus, dried tangerine peels, dried clove buds, ginger, cinnamon, licorice roots and lithospermi radix -- are added.

After letting it sit for about two months, the next step is to remove the medicinal ingredients and ferment the alcohol for a 1 1/2 to two years, after which gamhongno is complete. The medicinal plant bangpung (siler divaricata) was originally an ingredient for the drink but can no longer be used in the production of alcoholic beverages as bangpung is now legally classified as medicine.

Pouring gamhongno in a cup made the soft cinnamon fragrance hover around the nose. A sip resulted in a sweet taste that highlighted the flavor of the medicinal ingredients. Though a strong liquor at 40% alcohol by volume, gamhongno has a clean taste and pleasant scent.

"Drinking alcohol can make the intestines cold and cause illness. But gamhongno has the opposite effect of warming the intestines thanks to its medicinal ingredients and has long been used as medicine," Lee Ki Sook said. "Court physicians made it and called it naeguk (royal court) gamhongno."

"On days when I'm physically tired, I mix gamhongno and warm water in a 1:2 ratio and sip it little by little and slowly, as if drinking tea."

Gamhongno is also used as a cocktail base. In the inaugural cocktail competition for Korean food experts on May 28, the drink won both the grand and first prizes.

Gamhongno affogato, made by adding a few drops of gamhongno on vanilla ice cream, is delicious thanks to the smell of hazelnut and chocolate from the liquor. Lee Ki Sook recommended yakgwa (traditional confectionery made with honey and wheat) or dark chocolate as the best foods to eat with the drink. 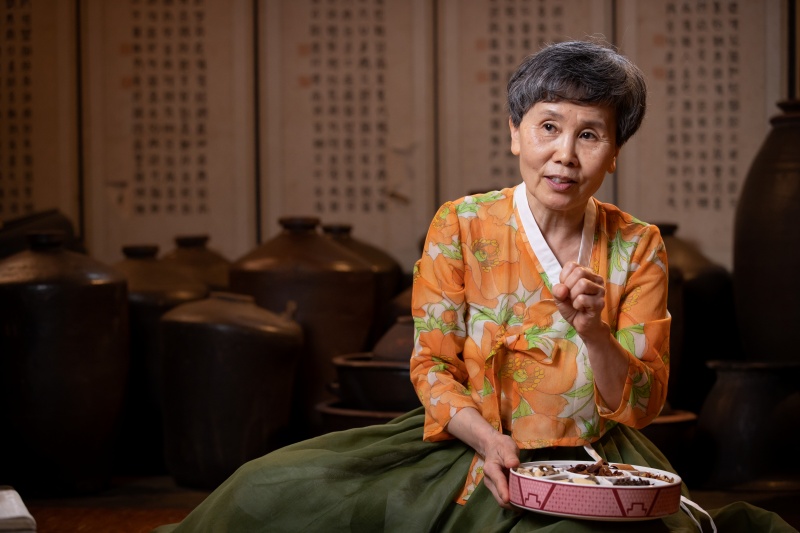 Gamhongno was registered in 2014 in Ark of Taste, an international catalog of endangered culinary heritage published by the Slow Food movement of Italy, a group that records and preserve foods at risk of being lost. The publication begins with what foods should be in the ark of preservation if humanity is in danger of extinction.

When Korea in the 1950s enacted a law on grain management that banned the use of rice in the production of alcoholic drinks, many traditional drinks became extinct, and gamhongno was in danger being lost.

Fast forward 30 years, when government policy shifted toward promoting traditional drinks ahead of the 1988 Seoul Summer Olympics, Lee Ki Sook's father Lee Ki Choon was recognized as an intangible cultural asset. He passed down how to make gamhongno to his son and daughter.

Lee Ki Sook's older brother died in 2000, leaving her as the sole heir to the drink's tradition and legacy.

"I learned how to endure hardship when as a child, I recalled my father taking naps by the pot to protect gamhongno while secretly making it," she said.

To Korea.net readers, her message was, "Gamhongno has a herbal fragrance that people abroad should be used to and is also a medicinal liquor that warms the body," adding, "Please enjoy gamhongno and read the stories behind it."

*All titles in parentheses are unofficial translation.